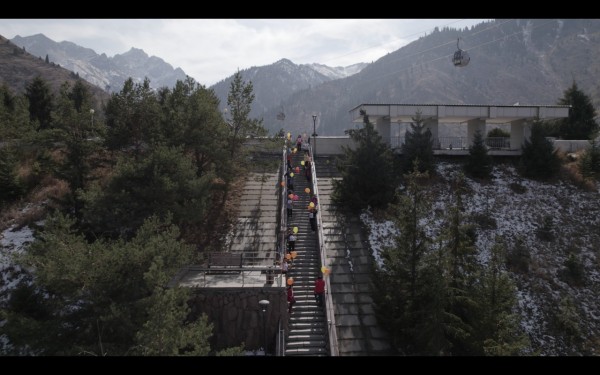 Today, on October 9th, 2021, 30 palliative care volunteers and advocates and over 500 participants gathered at the height of 1750 meters above the sea level to celebrate the World Hospice & Palliative Care Day. Located at the highest point of Almaty, the Medeu antimudflow Dam is a popular landmark of the city, visited by hundreds of residents and visitors every day. 842 steep stairs of the legendary Ladder of Health lead to the dam, opening breathtaking view of the surrounding snow peaked Zaili Alatau mountains. One group of volunteers holding balloons and wearing signs related to the Kazakhstan Association of Palliative Care and the WHPCDay, stationed themselves in the beginning of the stairway. They encouraged the ascending visitors to climb the stairway with the purpose of supporting people with serious incurable illnesses. One could see from the top point of the stairway lots of red, orange and yellow balloons mounting up as a symbol of raising awareness about palliative care. Those who successfully reached the dam were greeted by another group of volunteers. They answered questions about palliative care, shared knowledge about hospices and palliative care, distributed leaflets. People shared their own stories and took pictures with thematic frames, which they shared in their social media accounts with dedicated hashtags, making the event even more visible to others. Prior to the event volunteers, caregivers, hospice workers, advocates and other palliative care supporters used virtual frames in English, Russian and Kazakh for their social media avatars in solidarity with the ideas and mottos of the #WHPCDay21. Viral videos from hospices, palliative care educators and providers were spread during several days around October 9th.